PQ-13 was a British Arctic convoy that delivered war supplies from the Western Allies to the USSR.  It comprised 19 merchant ships and was escorted (from Iceland to the Soviet Union) by one cruiser (Trinidad), two destroyers, and two trawlers, augmented by three whalers being transferred to the Soviet Navy. PQ 13 left Reykjavík on 20 March 1942. On 24 March, the convoy was struck by a violent four-day storm, which left the convoy scattered and in disarray. The ships were dispersed over a distance of 150 miles. Over the next few days the ships coalesced into two groups, of eight and four, with four others proceeding independently.

This convoy was attacked by german destroyers, u-boats and aircrafts.

* U-boats that fired torpedo or used the deck gun.

OK Rick, I've recalculated all the coordinates for the real locations I need, with the values you gave to me. As you can see, North Cap, Narvik and Trondheim seem to be at the correct latitude now.
So, I consider these values enough precise to keep them. 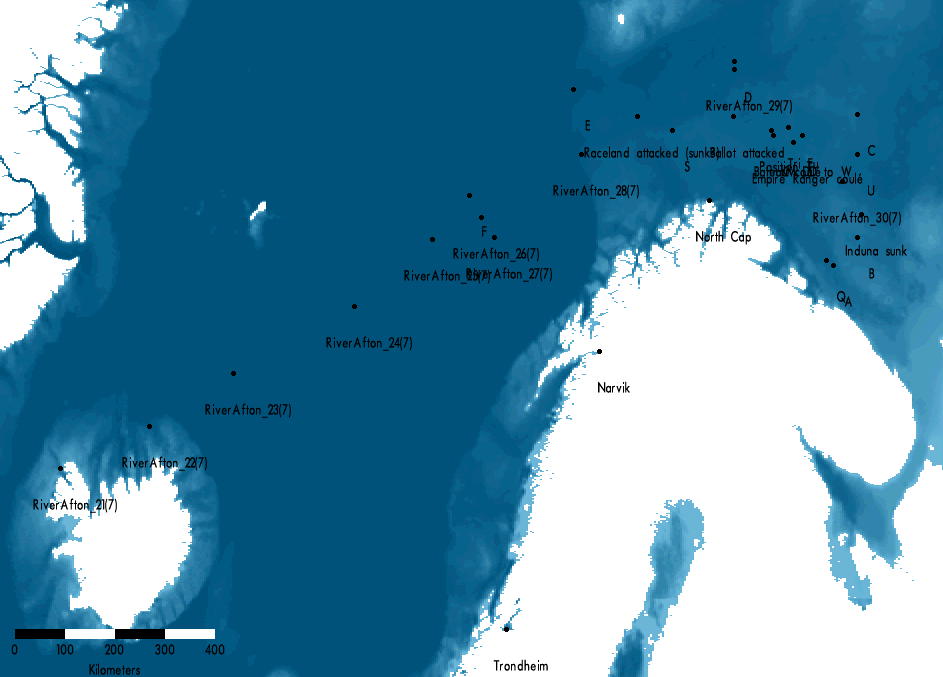 This will be the very first SH3 mission with exact routes, coordinates and times. 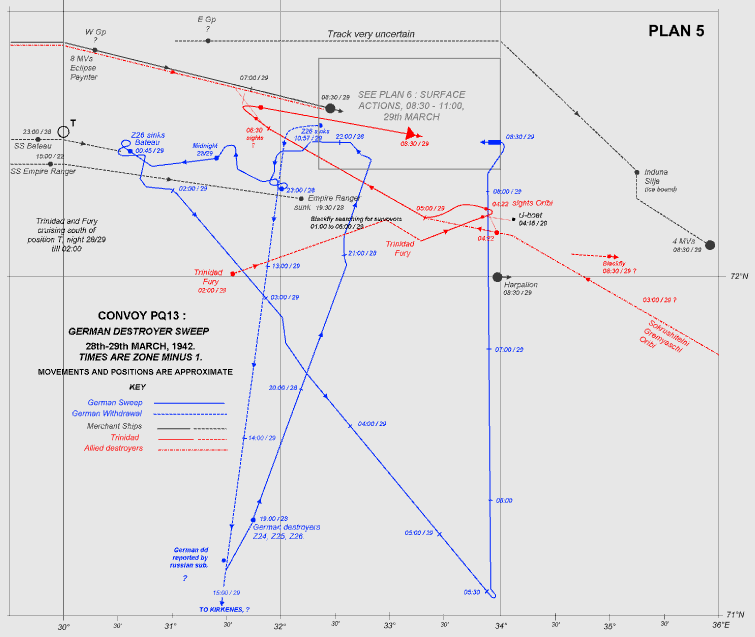 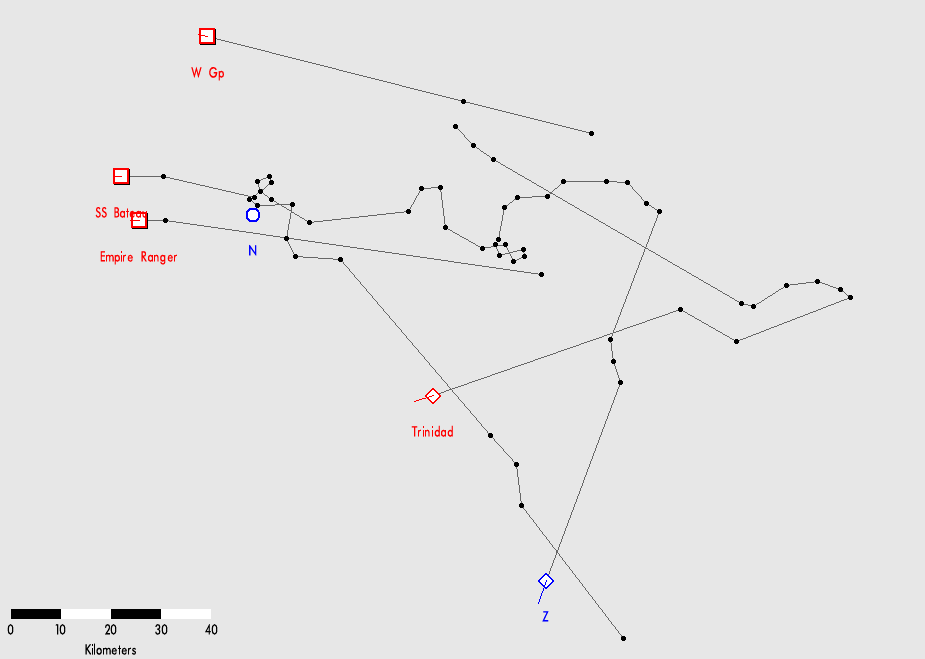 How did I proceed ?

1. I received scanned historical maps from a friend who had the book containing these maps.
2. Because of the bad quality of the pictures, I re-drawn them in Paint.net.
3. With Google Earth, I searched for the real distances at this latitude.
4. I rescaled the map to fit SH3 scale.
5. I drew the rescaled maps on a transparent sheet.
6. In mission editor, I drew the routes with this transparent sheet on my screen.
7. I adjusted speeds of each point of each unit in order to have the correct time for each point.

THE FULL MAP OF EVENTS : 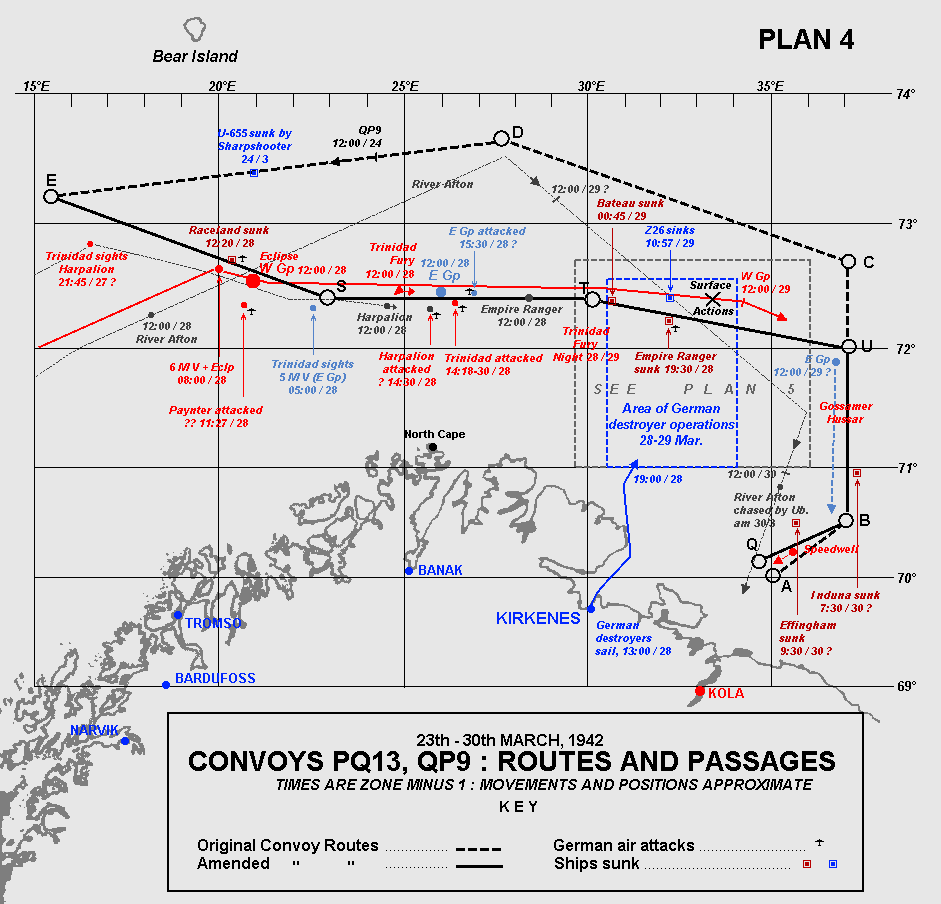 First, I use Google Earth to find several values :

* for vertical scale : distance between 2 points separated by 1 degree of latitude = 112 km.

Now, I rescale the previous map with the SH3 scale, with the 112 km distance as reference (put between 73 and 74°N). We can see that the horizontal scale is correct at 73°N (that's logical), but no more at 69°N. If I had rescaled the map putting the 112 km distance between 69 and 70°N, the horizontal distance (between 2 points separated by 5 degrees of longitude) would have probably been 197 km in SH3.

Moreover, we can see (thanks to the points calculated with real coordinates and placed on the map from the Locations SH3 file - see https://kendras-sh3-modding.forumgaming.fr/t39-wip-historical-mission-the-pq13-arctic-convoy#85) that Rick rescaled map has not the proper scale for horizontal distances (and it's worse when you go to the South). 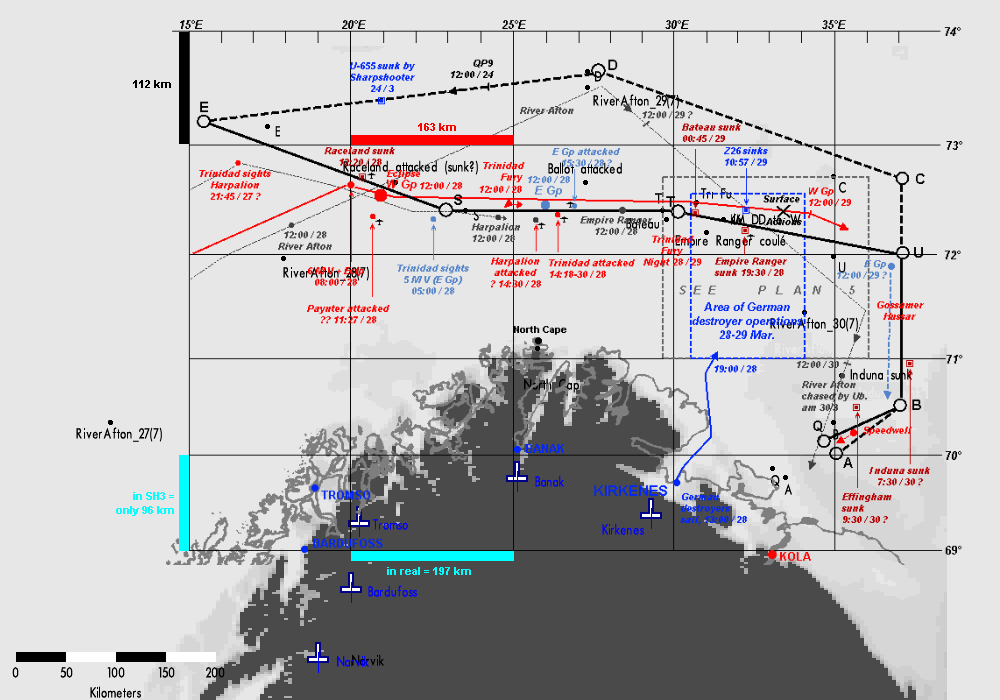 The practical conclusion is that the points of the Locations file have the right latitude, but a completly wrong longitude (but they are perfectly placed compared to the land of the rescaled map (but the more you go to the South, the more horizontally distorted is this land...)).

I've recalculated the values of the formulae which calculate SH3 coordinates from real GPS coordinates.

In SH3, one degree of longitude or latitude equals to 120 km. On the historical maps of PQ13, it's different (see previous post). 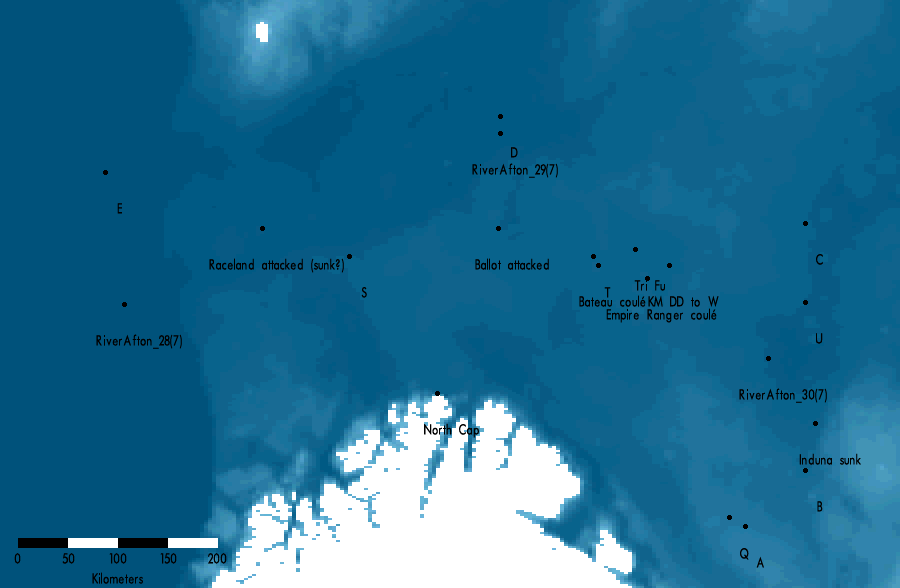 Now, the points on PQ13 historical map and those in the mission editor are perfectly placed on top of each other, except for the latitude (but the maximal difference is only about 10 km in the south). The land shape remains acceptable (even if the horizontal scale could be a bit larger).

Small problem : a unit that should spawn before the mission starts, doesn't spawn. In its properties :
- the entry date and time are correct
- the option "evolve from entry date" is selected.
- the option "docked" is not selected

Else, I'm having unexpected CTD with a ship from GWM when exploding ...