This add-on contains a new destroyer for SH3 : the russian Gnevny class destroyer.

The 3D model comes from the game "World of Warships" (abbreviated "WoW") and is very detailed and accurate. It represents in fact the 1942 version of the Gremyashchy. (2)

It required a long, fastidious and tedious work from me to convert it to a fully working SH3 unit with many details and sophistications.

Historically, the Gnevny class, sometimes known as the Gremyashchiy class, was the largest class of russian destroyers during WWII, with 30 units produced (https://en.wikipedia.org/wiki/Gnevny-class_destroyer).

- re-scaled, flipped on X-axis and centered on Z-axis.
- detached many parts from the ship to make them destroyable (masts, boats ...) or movable (rudder, propellers, guns ...)
- corrected the glitches with lights and shadows, by reworking the 3D models of all the hull and superstructures, the rudder, the main range finder and the motor boat.

* .CFG + .EQP : added a special loadout to simulate the ship's aspect and behaviour when anchored.

- converted all .dds textures in .tga files and imported them, only the biggest ones stay out of the .dat file (to avoid the game to crash).
- attached all the different 3D meshes to their correct texture.
- placed working propellers and rudder (with correct rotation axis).
- added and placed all the ship's guns nodes.
- added nodes for special equipment : flags, range finders, radar ...
- added nodes for lookouts crew.

- created the ship's .sim file with accurate historical data.
- calculated all the possible angles of fire from all the guns placed on the ship.

* .VAL : added shipwake and other effects.


* created the picture for the recognition manual in two different versions.

* wrote the logs with historical data in english, french and german.

- placed all guns in a library .dat file, with their different mobile parts with a corrected rotation axis.
- created a DC launcher animation, with russian depth charges.
- made the range finders aiming at the targets.
- made the radar rotating.
- attached some crew to all the guns (even if not enough compared to the historical crew number).
- created a new texture to give a russian uniform to the ship's crew.
- created sinking animated debris (floating crew and lifeboats).
- resized the animated flag to create the small naval jack.

- created the proper sim parameters for the guns.
- number of depth-charges per rack fixed at 25.

- The ship can break herself in two parts if she receives enough damage.

- When sinking, the crew on the bridge will float on the sea. A lifeboat will also appear with its crew on board.

- In the mission editor, you can choose the optional loadout called "Anchored". In this case, you should always set the ship as "docked". When this option is activated ("Anchored"), the ship will have the naval jack at the bow and the naval ensign at the stern, the guns will be inactive, the range finders won't be active, the sensors won't be working (except the visual one), the radar won't be turning, and there will be no crew at all on the bridge nor behind the guns.

- About sonar : provided by the Lend-Lease program, will appear on-board at the beginning of 1942.

- About radar : provided by the Lend-Lease program, will appear on-board at the beginning of 1942, was probably an air-warning radar, so there isn't any sensor attached to it.
__________


Cut-paste the folder called "WoW - Gremyashchy" into your MODS folder, and enable it with JSGME.


Now, you can see two new optional mods in your list :

- "WoW - Gremyashchy - dark drawing" : this option has to be activated if you have dark pages on your recognition manual (in GWX for example).

- This is a non commercial mod. If you want to use it in one of your mods, please ask me before, and give proper credits to the authors (including those who are cited at the end of this readme).

- As it is a very detailed 3D model, more than two Gnevny class destroyers spawned may cause the game to crash if too many particles effects are generated at the same time (explosions, fire ...). This risk might be smaller if the units have the "Anchored" loadout option selected.

- As for any new mod, there is a very small risk of ID conflict with your current game files which might cause the game to crash.
__________

- (1) "World of Warships" for the awesome 3D model of the Gremyashchy destroyer.

Admin a écrit:- some glitches have to be corrected with lights and shadows, in particular on the main guns. 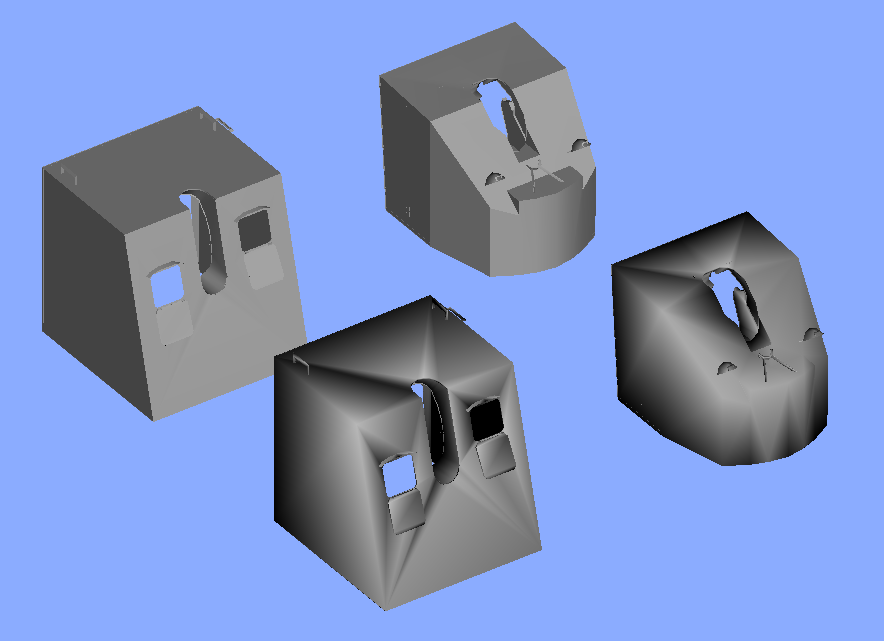 Admin a écrit:- no damage texture on the hull when hit by shells or torpedoes
- the torpedoes don't explode when they hit the hull ... why ?

Problems solved. It was due to the fact that the number attached to the 3D model was set to 6 instead of 4. 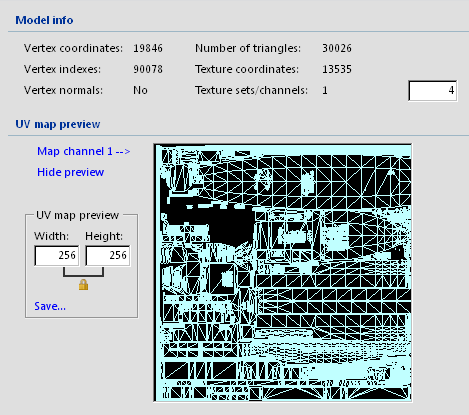 Problem solved. by creating a new animation for a DC rack and creating a 3D model of the same DC model carried by the ship. In the animation, the DC must not fall too low, else there is no splash effect when it hits the water.

Admin a écrit:- attach crew to the other guns

Admin a écrit:To do :
- give a russian look to the uniforms 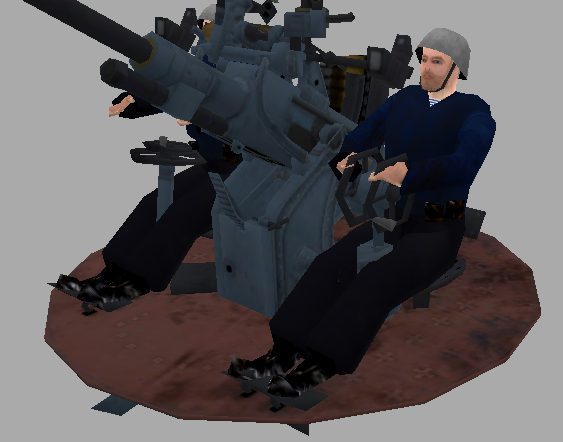 A few shots taken at night : 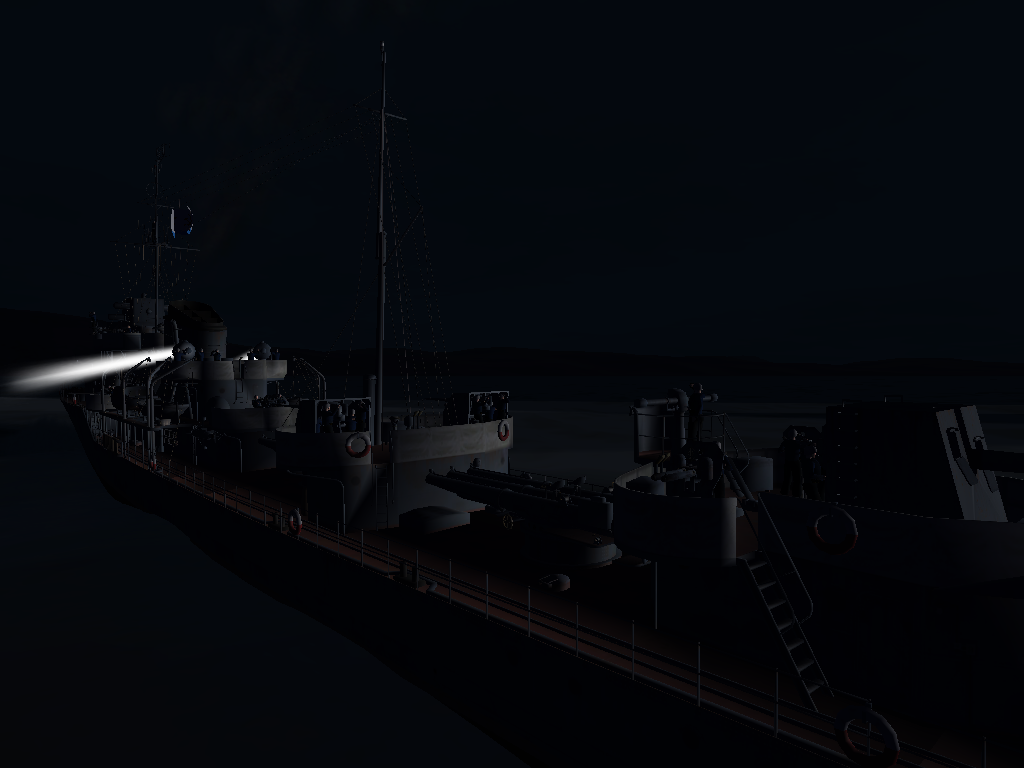 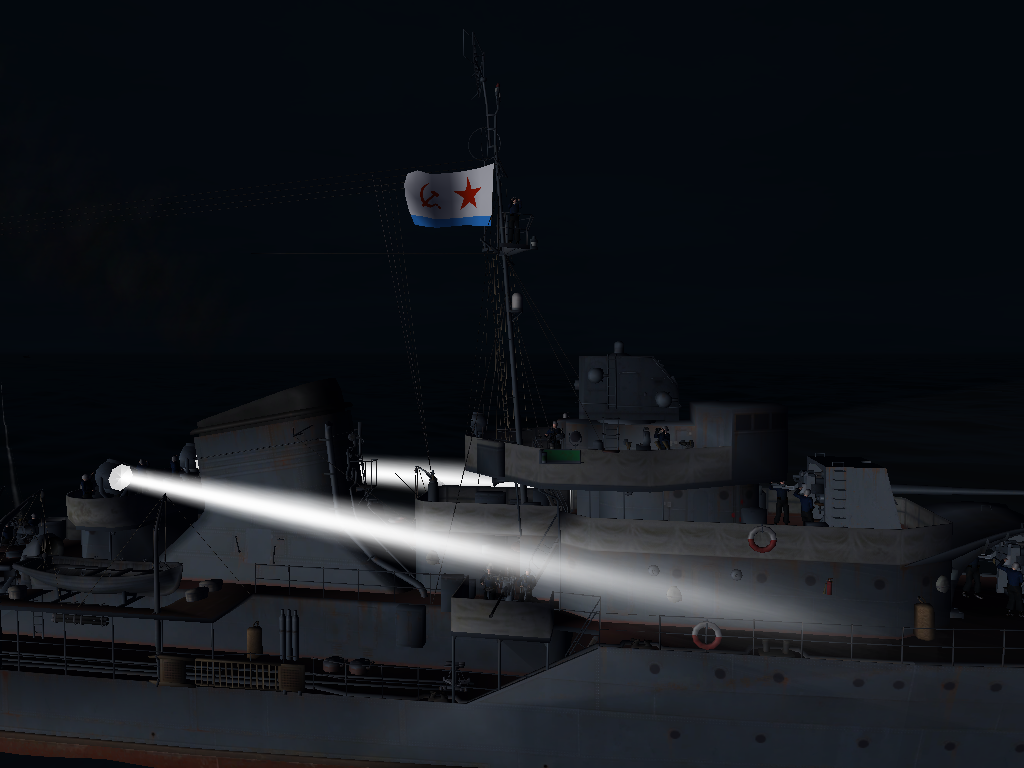 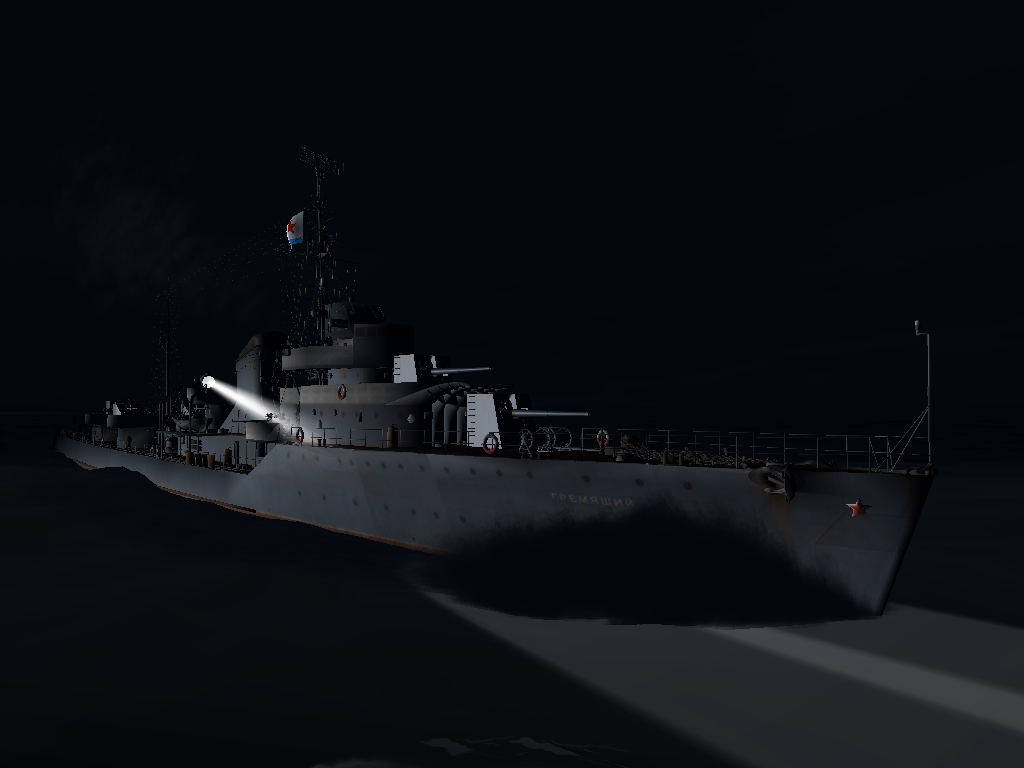 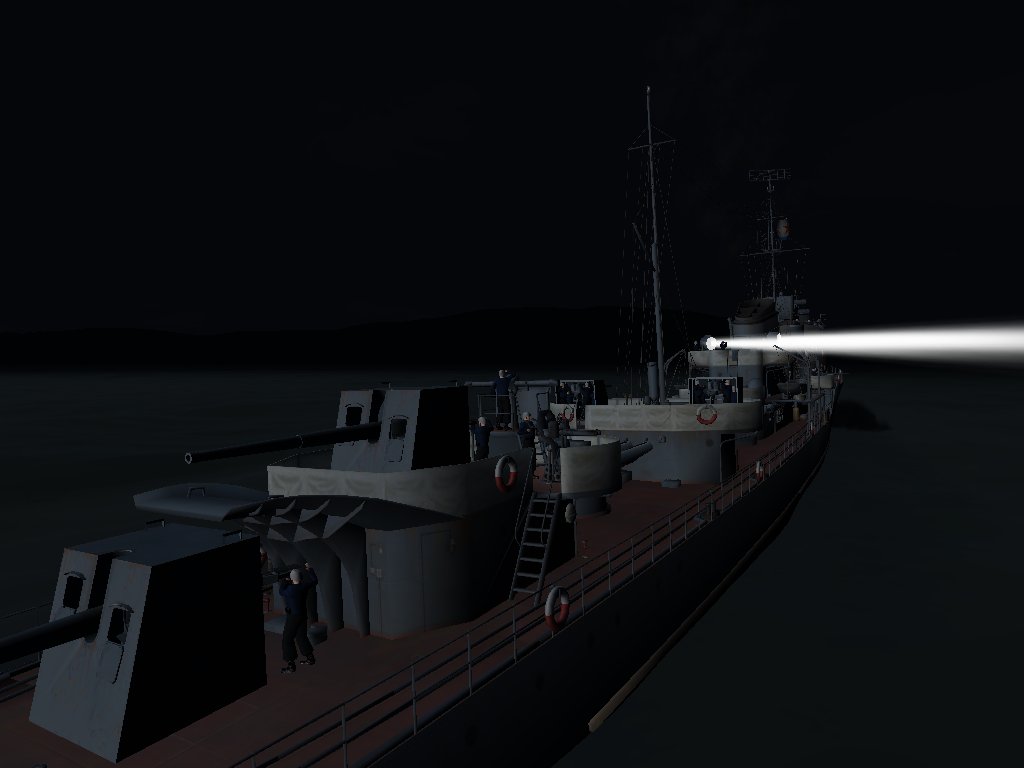 Skin for the arctic theater 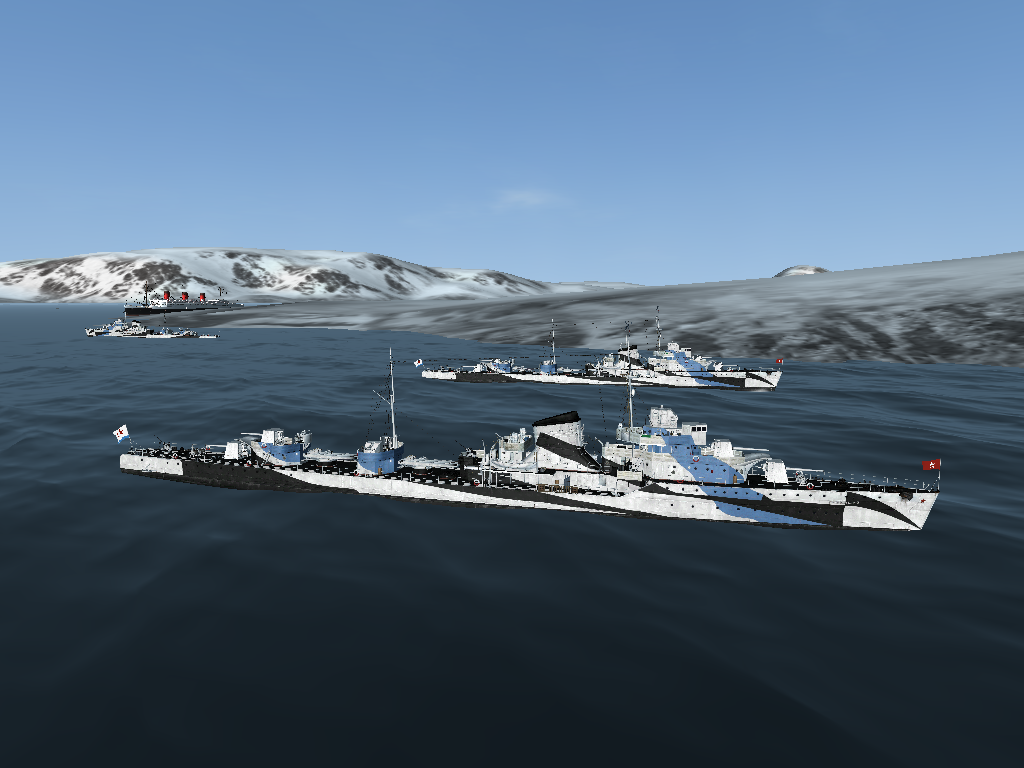 I've discovered a small error in Grem.zon file which makes the game crash when the yawls are destroyed (the value of a collision sphere was -10 instead of -1).
Else, I've added the AO-map to the main texture.
I also added some damage boxes in the Grem.zon file, and added sinking effects when the ship is cut into two parts.
I corrected some minor errors in Grem.dat (about the number assigned to the 3D models).
I put out of the Grem .dat all the small objects with their texture.
I'm going to create a better map icon.